Come and discover the City of Corsairs at 3km from Suhiberry Campsite!

Vacations in campsite near Saint-Jean-de-Luz

Are you looking for a campsite in Saint Jean de Luz ?
For a dream vacation in the Basque Country, Camping Suhiberry located not far from Saint-Jean-de-Luz welcomes you in an idyllic setting.
You will then have easy access to the bay of Saint-Jean-de-Luz from the campsite.
At the Saint Jean de Luz campsite, we offer mobile home rentals and camping-caravanning sites. For the comfort of our guests, we offer accommodations that are both spacious and equipped for everyone’s comfort.
You will choose the configuration of your mobile home according to your desires. With a surface of more than 30m2, the bungalows are perfectly adapted for a stay in couple, between friends or in family in the Basque Country.
They have a pleasant terrace that will allow you to enjoy your meals outside and the beautiful evenings in summer.
The camping pitches are large and are separated by a hedge to guarantee space and privacy for everyone. The wild environment of the campsite will make you live a unique experience near Saint-Jean-de-Luz.

In the 17th century, the fearsome Basque fishermen converted into privateers gave this city its nickname.
Ideally located in the heart of the Basque coast, Saint Jean de Luz is a seaside destination that you will appreciate during your vacations in the Basque Country.
Its large sandy beach sheltered at the bottom of a semi-enclosed bay is accessible very quickly on foot from the city center. This beach extends from the Pointe Sainte Barbe, a remarkable panoramic viewpoint, to the port lighthouse.
In the pedestrian street Gambetta, you can stop at the Saint Jean Baptiste Church, typically Basque and hosting many choirs. It has a rich religious heritage and was the setting for the marriage of Louis XIV to the Infanta of Spain.
Not far from there is the Place Louis XIV, named after the house where Louis XIV stayed after his marriage. 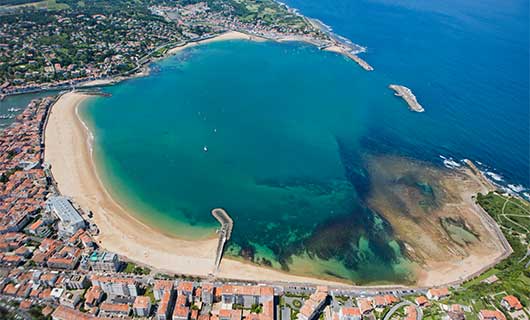 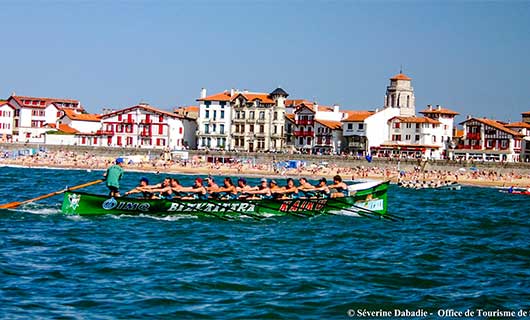 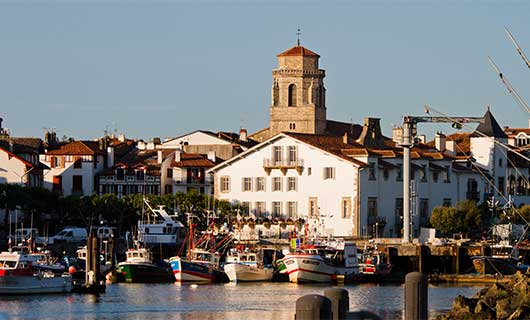 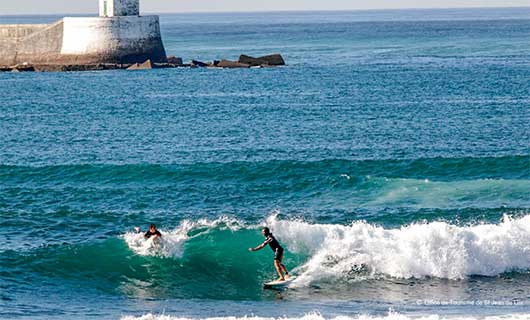 This square, lined with restaurants and cozy café terraces, is home to a central kiosk, where you can attend many musical evenings played outdoors, as well as traditional dances to immerse yourself in the local Basque atmosphere. Many painters expose their works around this kiosk for the happiness of the eyes, big and small.
Finally, the House of the Infanta dominates the fishing port, still very active. You must absolutely taste the ttoro, a fish soup which is a local specialty and do not miss the Tuna Festival of Saint Jean de Luz, famous on the Basque Coast.
Every Wednesday and Sunday evening, take part in the musical ball animated by a group and by the intervention of the Toro de fuego in the Louis XIV square. After the race of the “bull”, on the shoulders of a brave man, illuminated by its fires, a pretty flaming crown flies in the sky for the greatest happiness of the eyes. The confetti battle at the end will please the little ones!
Walkers, come and take part every Sunday at 11am on the square to a musical animation. Sit on the terrace with an aperitif and enjoy the organized singing and dancing.
Saint Jean de Luz is both a Basque and a cosmopolitan city because it has experienced many waves of immigration. The “Euskara”/Basque is frequently spoken there.

During yourcamping vacations in the Basque Country, discover also :

You can find out more about which cookies we are using or switch them off in settings.

This website uses cookies so that we can provide you with the best user experience possible. Cookie information is stored in your browser and performs functions such as recognising you when you return to our website and helping our team to understand which sections of the website you find most interesting and useful.

Strictly Necessary Cookie should be enabled at all times so that we can save your preferences for cookie settings.

If you disable this cookie, we will not be able to save your preferences. This means that every time you visit this website you will need to enable or disable cookies again.

This website uses Google Analytics to collect anonymous information such as the number of visitors to the site, and the most popular pages.

Please enable Strictly Necessary Cookies first so that we can save your preferences!